An automata is a character brought to life with a collection of mechanisms. It might be a flying pig or a skiing sheep or perhaps a festive model featuring a moving model of Santa. The common theme is the use of mechanism. In paper automata, the power for the mechanism is usually supplied by a hand turning a crank handle. 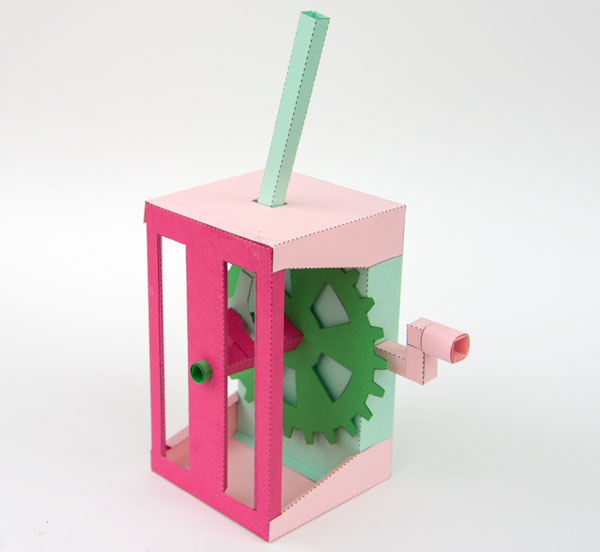 This Essential Mechanisms™ project uses a roughly 2.5:1 reduction gear to drive a crank and pushrod. You need to turn the handle roughly two and a half times for each complete revolution of the crank.

Check out the final result in this YouTube video.

Print out the parts onto four sheets of thin card. 230gsm / 67lb is about right. I’ve printed mine out onto coloured card to make the finished model colourful. You can use white, coloured or patterned card as you please.

Score along the dotted and dashed lines then cut out the crosshatched areas before carefully cutting out the pieces.

The two gears are made from double thickness card. Fold them over and glue them down. 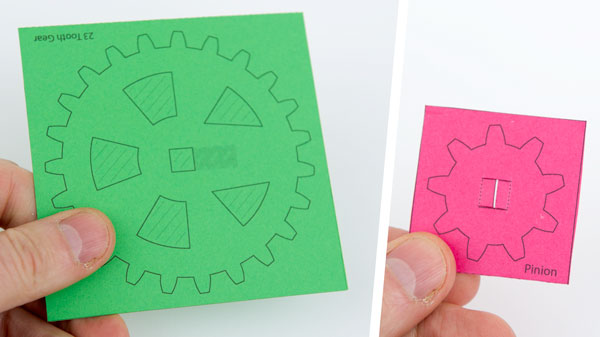 Once the glue is dry carefully cut them out.

Fit the short axle piece into the pinion gear lining it up with the grey line and gluing down the tabs. 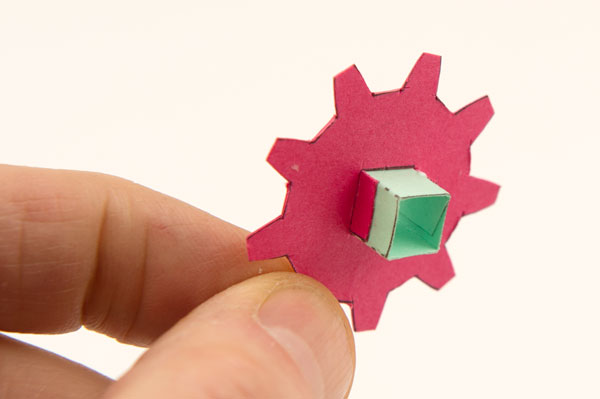 Assemble the two crank pieces as shown in the next to pictures. 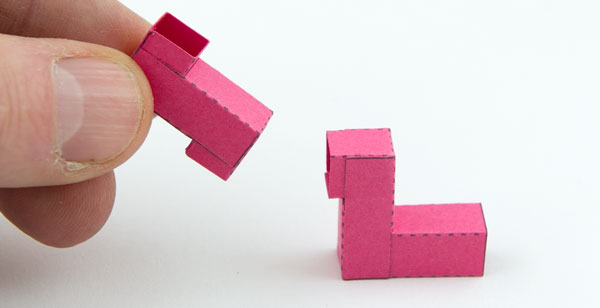 Glue the smaller crank piece into place on the larger gear. 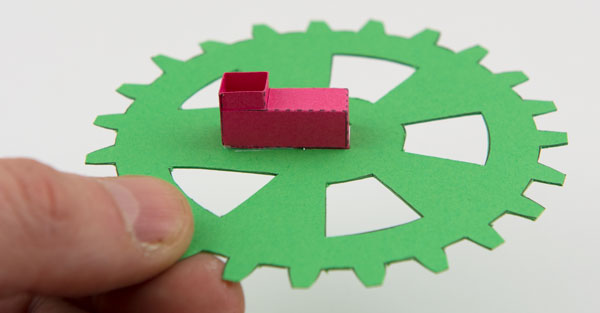 Roll up and glue down the four axle tubes lining up the edges carefully with the arrow points.

Glue the shortest of the axle tubes into the crank piece on the back of the gear maing a stub axle as shown. 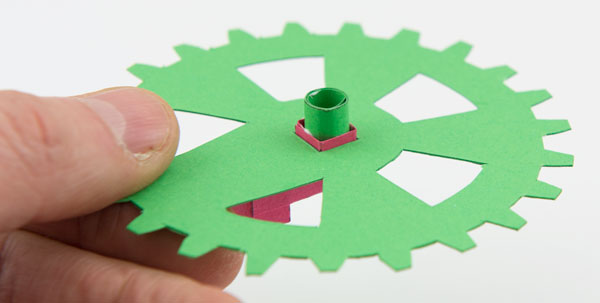 Make up the push rod end pieces from double thickness card as shown. Once the glue is dry carefully cut them out. 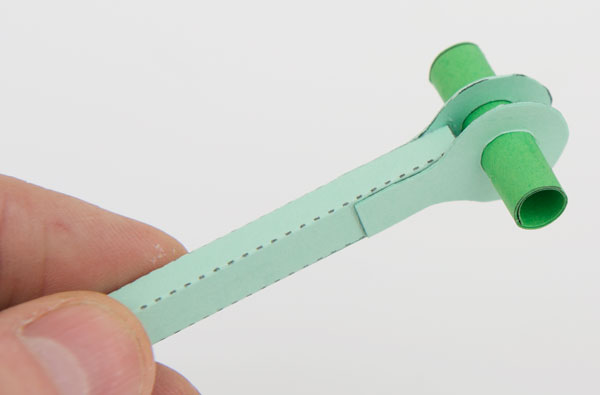 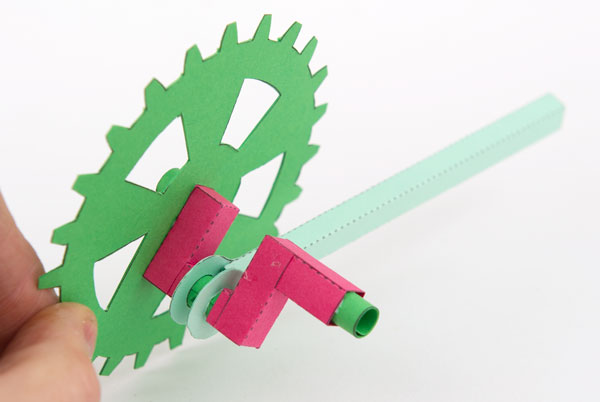 Make up the box back remembering that dotted lines are valley folds so two of the end tabs fold outwards. 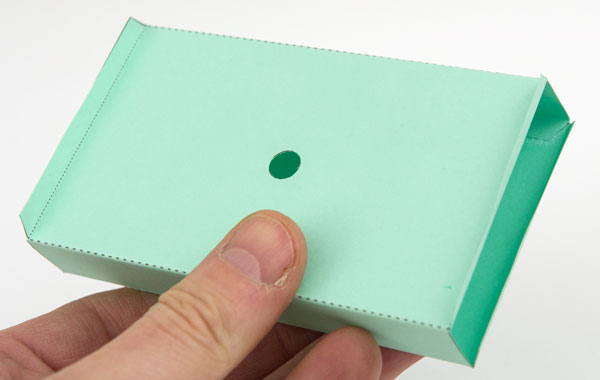 Thread the long axle into place in the box back. It should be free to turn. 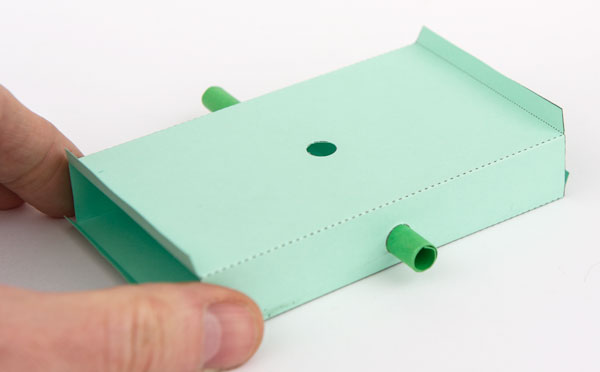 Fold round and glue down the tabs on the sides of the box top and box bottom to make triangular tubes.

Glue the box top (with the rectangular hole) and the box base (no hole) onto the hill fold tabs on the box back. With the box top to your left fit the pinion gear into place gluing it to the axle.

Fold up and glue down the four triangular tubes on the box front before proceeeding. The centre tubes are equilateral triangles, the side tubes are right angled triangles.

Glue the box front to the box top.

Fold up the base and glue it down making as accurate a right angle as possible with the box back. 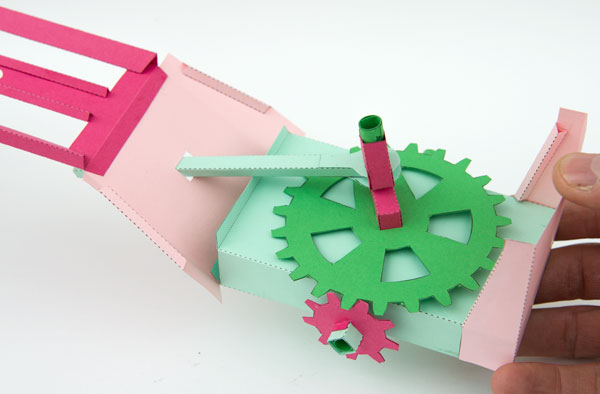 Fold round the top and the front fitting it over the axle tube and gluing it to the box base. 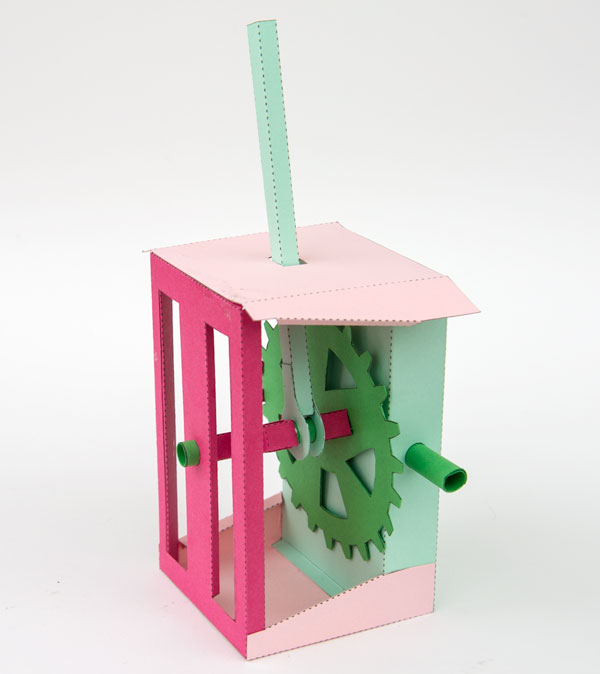 Glue the handle to the axle tube. Complete the model by gluing the box top flaps down.

Turn the hand and watch the crank turn! 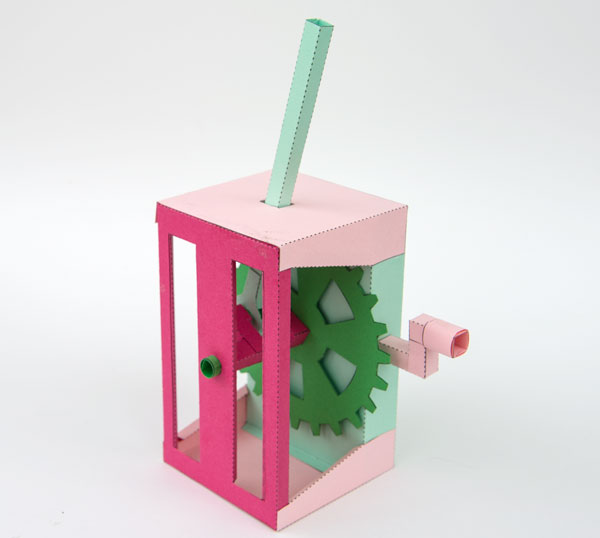