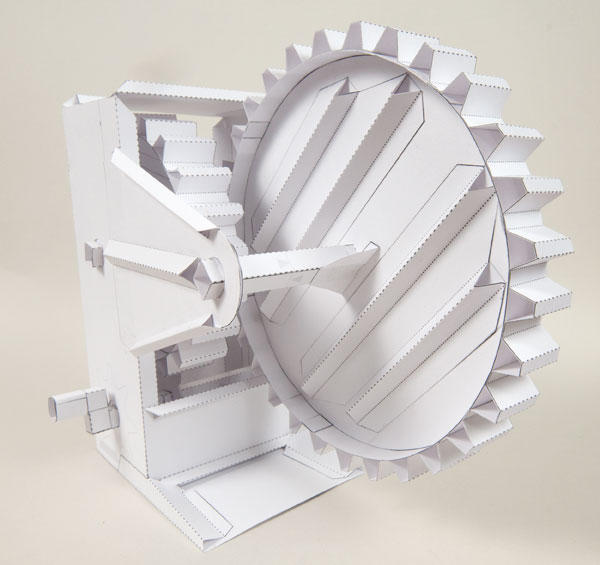 In this gear train there are three sets of gears all connected together. The end result is that the speed of  the handle on the side is reduced by 18.75 times. It is the same as driving a 150 tooth, 70cm diameter, monster gear with the eight tooth drive gear but with lots less teeth to make!

Print out the parts onto thin card. (230 micron, 67lb) Score along the dotted and cut out the holes before carefully cutting out the parts.

Both main gears are constructed the same way. Each is made from two strips joined together to make a longer strip. Make sure that they are joined together straight. Start at one end and glue the teeth as accurately as possible to the grey pads. The tops of the teeth are light blue for easier identification. 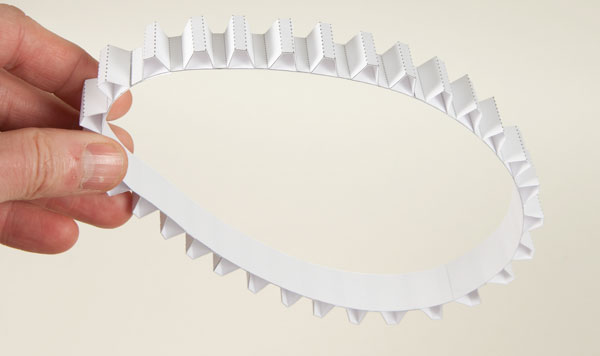 Roll round and glue the strip ends together to make a toothed loop. 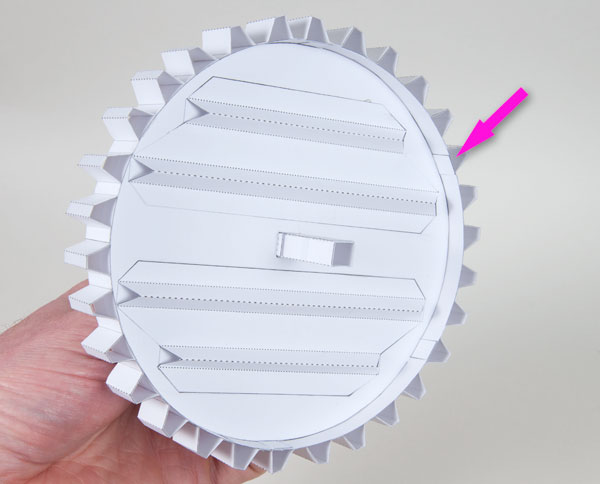 Glue the stiffeners to the gear inners on the grey areas. Fit one inner into the gear. Glue only  the six tabs, lining the tabs with the edge of the gear outer (arrowed) 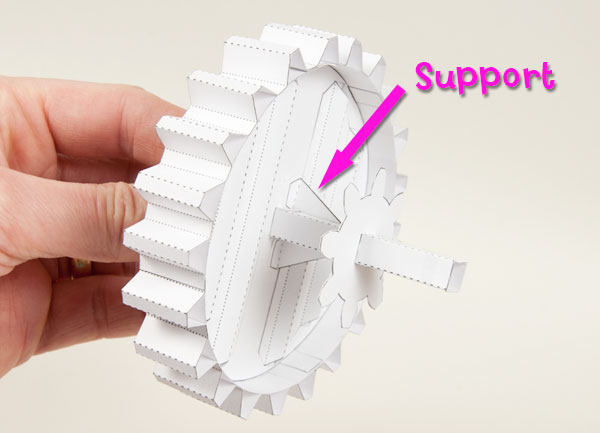 With an axle threaded into place for alignment flip the gear around and fit the other gear side back to back with the first. Make sure that the stiffeners are running at ninety degrees to each other. Slide the gear to one of the grey lines on the axle and glue it into place. Add a single support to each side to keep the axle square.

Assemble the eight tooth gear by folding it in half and gluing it down to make double thickness card then carefully cutting it out from the card square.

The above example uses one of the two shorter axles with the twenty one tooth gear and an eight tooth gear. 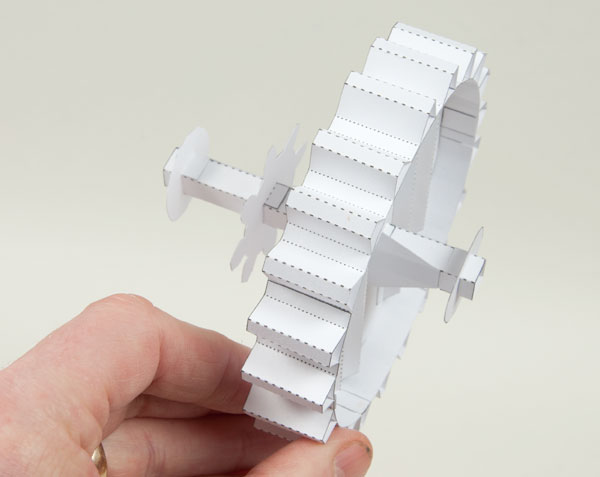 Add washers to each end. Make the thirty tooth gear in the same way but this time there is no eight tooth gear on the shaft.

Complete the gear set by gluing an eight tooth gear to the longer axle. 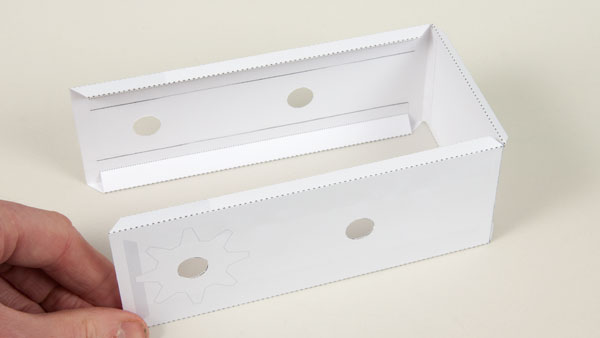 Assemble the box sides and the box end and glue them together. Notice that the triangular sections on the sides face inwards but those on the end face outwards. 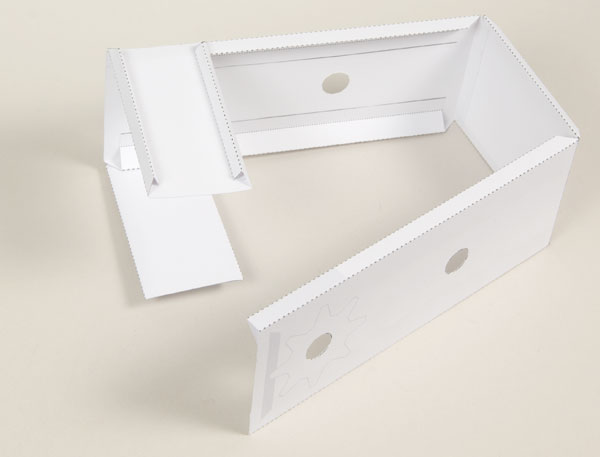 Assemble and glue in place the top and bottom as shown. Don’t glue the box closed yet. 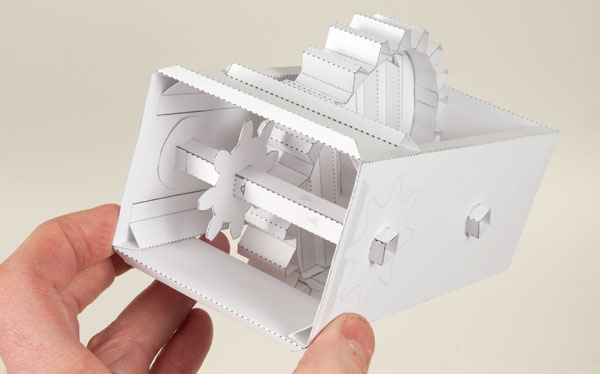 Fit the two smaller gears into the box as shown and glue the box closed. 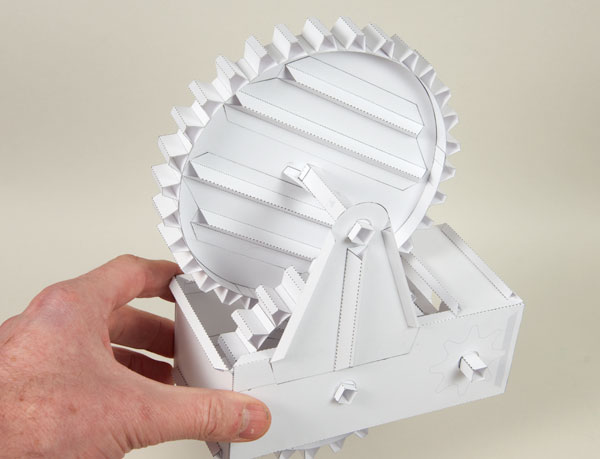 Assemble the two gear supports and fit the final gear into place so that it meshes with the eight toothed gear.

Fold up and glue the two square section tubes.

Fold one tube into the other and glue it down.

Roll round and glue down the long tab to complete the handle. 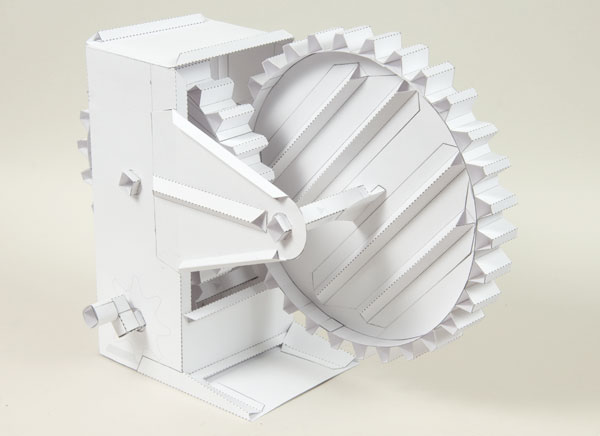 Complete the model by gluing the stand to the base. Note that it only runs across half the depth of the box.

That’s it. Turn the handle and see the big gear reduction. If you have been really accurate in your construction you should be able to spin the handle super quickly by turning the big gear!