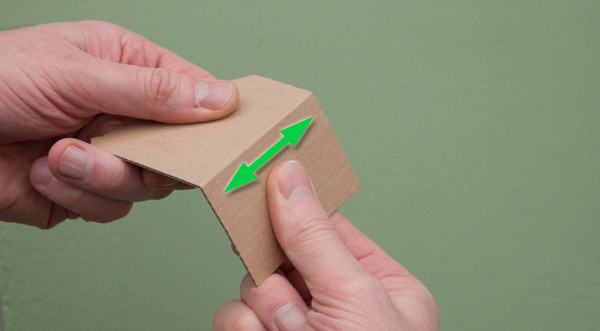 For a paper based material, corrugated card is remarkably strong and light. That is, so long as you don’t try bending it along the corrugations.

If you bond together two layers with the corrugations running at 90 degrees to each other the card becomes rigid in both directions. A big improvement in strength. 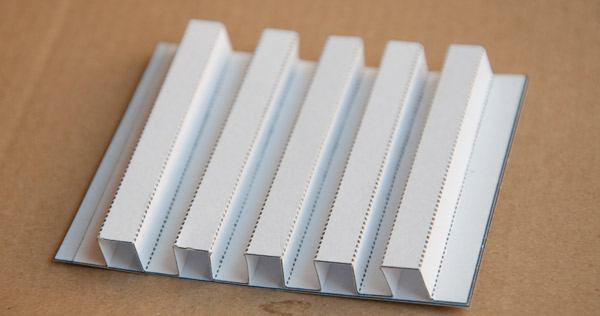 Time for some experimentation. Members can download the parts I’ve used in this post at the bottom of this page and play along at home.

In theory, the strongest corrugations should be lined up perpendicular to the base, like a series of I beams.

Although these are strong, as the corrugation sections are parallel to each other other issues arise.

Here is the completed corrugated piece. (Made from the parts on page three of the file)

Here’s the problem, all the parts are parallel, so they fold flat easily.

And the completed part also curves around easily the direction of the corrugations.

So, to overcome this lets try angling the corrugations. From the parts in page four of the file, the corrugations are now spread out almost twice as far apart with the verticals no longer vertical.

If the corrugations are pushed to one side the angle of the flat at the top changes, this helps give the structure its rigidity.

With the top piece is glued into place the way the flat wants to move limits the movement of the whole structure. The result is a strong and rigid structure. Technically it is not quite as strong as the piece with the vertical corrugations but the end result is structurally more useful. Imagine, though, if you tried to squeeze the two faces together. 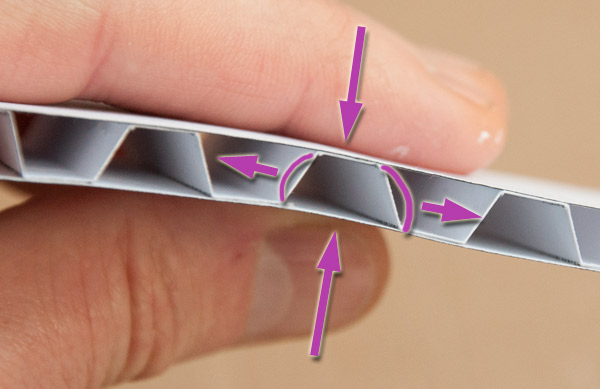 Because the corrugations are not vertical they will easily bulge out and the structure will be quickly flattened. 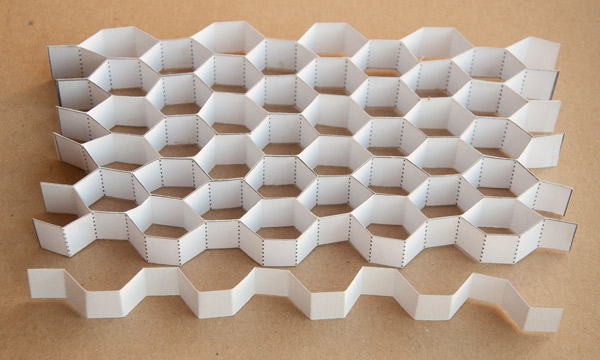 Try gluing together the parts from page one to make a honey comb as shown above. Notice that now the faces are now all vertically aligned yet the hexagonal layout stops the parts folding down flat. 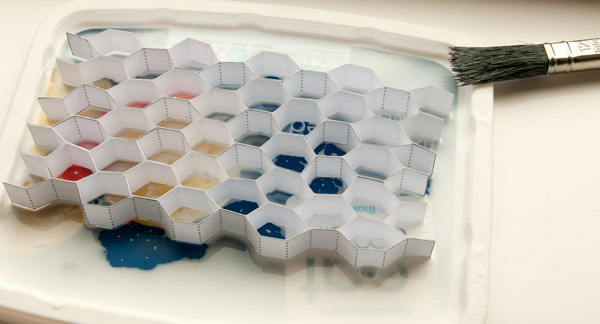 The difficulty is joining these pieces onto the top and bottom. You’re gluing an edge to a face, never a very satisfactory situation in paper engineering.

Here’s one possible solution. Mix some PVA glue (white school glue / Elmers) with some water. One part glue, two parts water. Spread the glue evenly over an ice cream tub lid so that it forms a thin layer then dip the honeycomb into the glue. 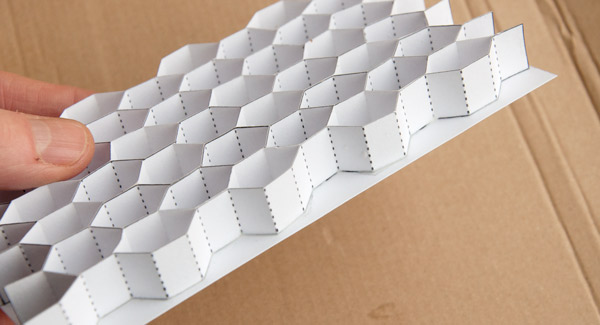 Transfer the now gluey honeycomb onto the bottom card. Rest it on a flat surface and weigh it down with a heavy book for a few minutes to dry.

Repeat the same with the top piece to complete the structure. Once the glue is dry you’ll be surprised, shocked even, just how rigid and light this piece is. It’s amazing! 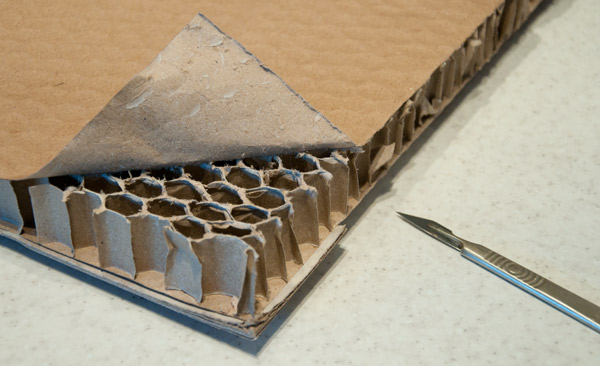 Where has this all come from? You’ll be thinking. And that’s fair enough. We had a dish washer delivered and the box it came in was made from this fabulous honeycomb material. It is strong and light but obviously harder to produce that simply doubled up corrugated cardboard. I was wondering why they had used the more expensive option and that resulted in the above musings.

Hope you enjoyed them.