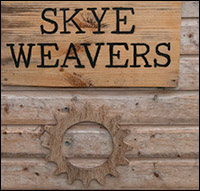 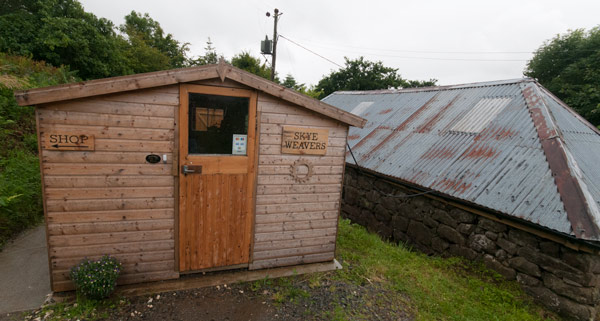 You may have guessed from the quiet on the blog that we are away on holiday. We are spending the week in the Isle of Skye. It was with great delight that we stumbled on Syke Weavers, an oasis of mechanical marvels. Roger one of the owners, generously spent some time showing me round.

The starting point is the winding of the bobbins. Originally Roger said that he hand wound each bobbin using an electric drill, a slow process which left each bobbin with a bulge of thread in the middle of the cone.

Once he got hold of this piece of equipment featuring offset eccentric cams he was able to wind five or ten bobbin simultaneously far more accurately than he had previously. In the next picture you can see that the bobbins are all loaded with thread in a beautiful symmetrical form. 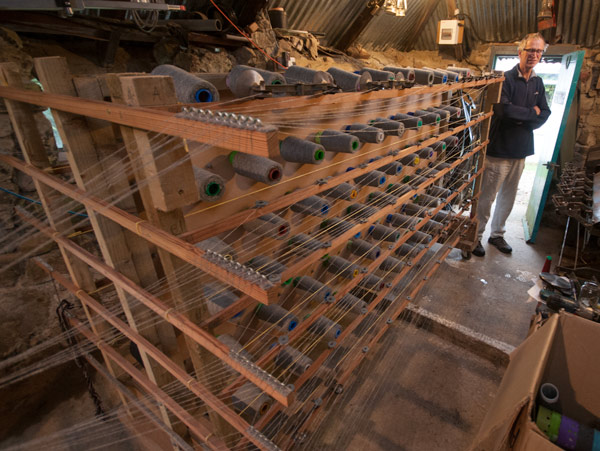 With the bobbins loaded up they are all mounted on this fantastic homemade framework. There are a similar number of bobbins out of sight on the reverse side of the machine. That's Roger in the background, planning the mkII version of this machine.

From here the threads are wound onto this giant drum. This one is hand made from all sorts of bits and piece. Recycled farm equipment for the big wheels, reclaimed floorboards for the laths and various parts of washing machine and other scrap to complete the device. The whole wheel turns beautifully smoothly on a hand made hardwood bearing. The threads from this drum are used as the warp , the longitudinal threads, in the weaving process. They are transfered from the large drum onto a smaller shaft and from there into the weaving shed. 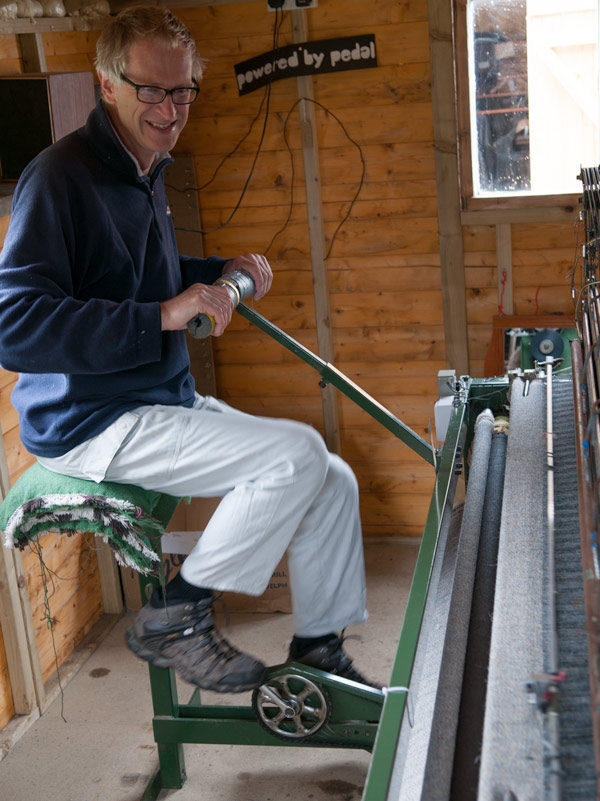 And here we have the real magic. Skye Weaver's loom is fully automated and powered from a set of bicycle pedals! 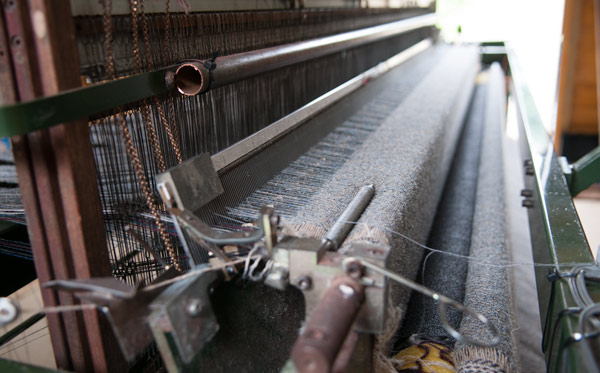 Once everything is set up, turning the pedals runs the entire weaving process. Cams at the end of the machine control which warp threads are lifted. 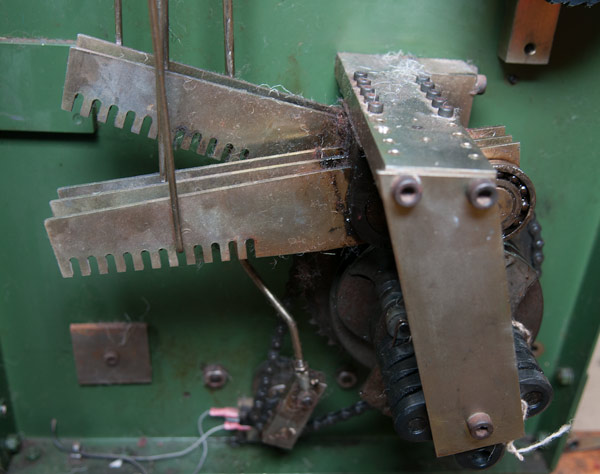 The cams link to these levers. Then wire these strings to pull combs of wires up and down controlling each of the warp threads. The weft is threaded using a rapier. A single hooked steel shaft is pushed through the gap in the warps, hooks onto a thread at the far end and pulls it back. 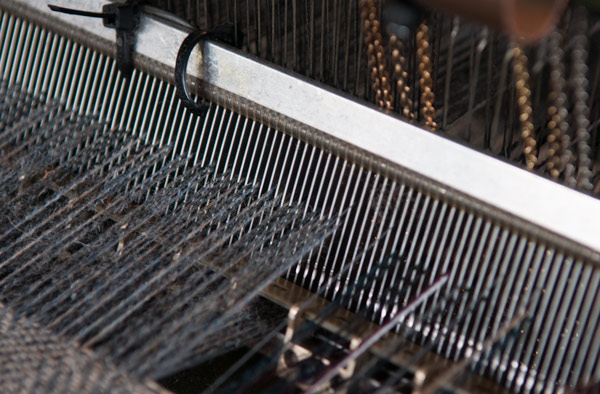 The weft is then knocked into place with a large metal comb. 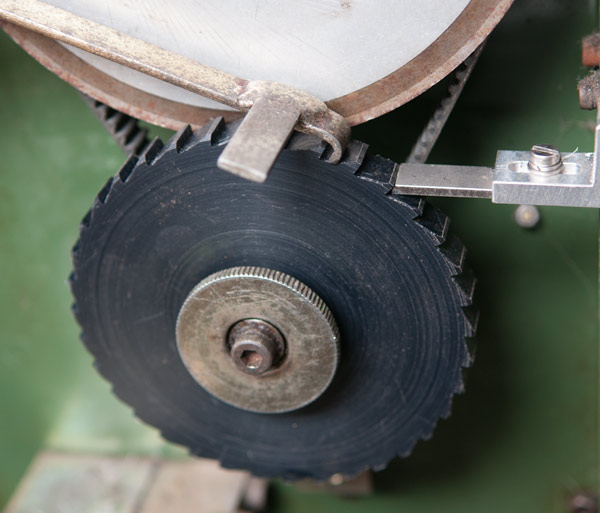 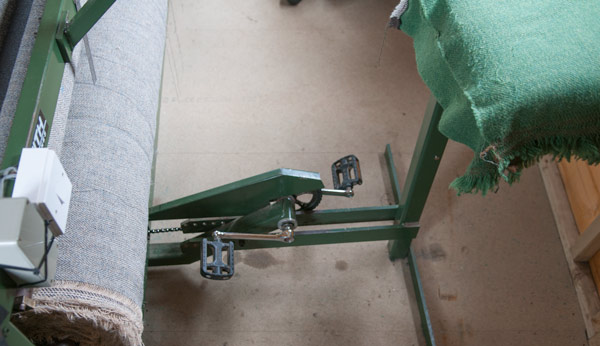 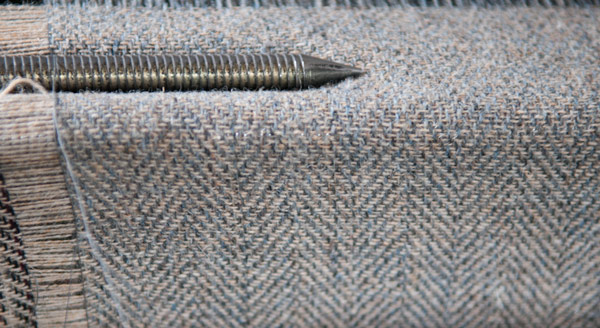 A section of finished fabric with a beautiful herring bone pattern created entirely using the four cams at the end of the machine.

Thanks for taking the time to show me round Roger. It was fascinating!