The four bar linkage is a simple mechanism with a whole variety of interesting uses. I'm working on a project that uses a four bar linkage to power a hammer wielding robot. A similar layout was originally shown on this mechanism page. I am provisionally calling it, The Hammer Bot. 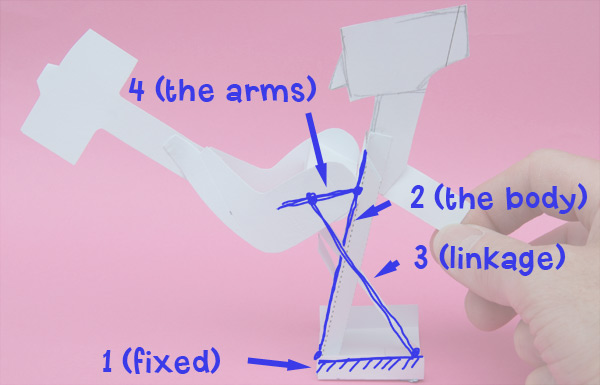 The two vertical linkages, two and three, are roughly the same length. Linkage four is a lot shorter that the fixed linkage, linkage one, so as the mechanism moves the arm linkage (one) rotates and with it, the arms and hammer are rotated downwards.

I have put together a fairly two dimensional  version of the mechanism to see how the linkage will work. Looking good, I think you'll agree.

Next step is to give everything depth, a 3D head and hammer and a solid body, after which I'll be deciding whether to drive the mechanism with a crank and handle or a push button.