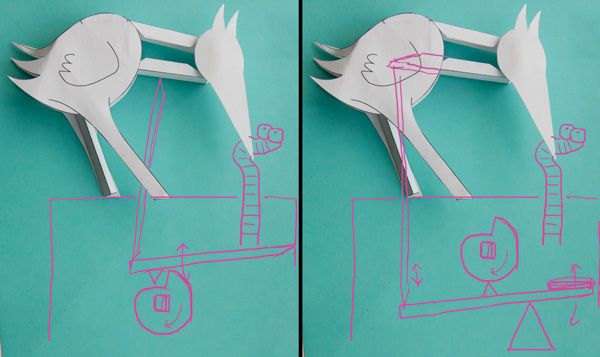 As the Early Bird (See, it now has a name!) develops I'm working on how to drive the mechanism. I'll be using a five toothed ratchet to drive a snail cam. For four pulls in the ratchet the bird will lift the worm further and further from the ground but on the fifth pull the worm will snap back down again as the edge of the snail cam lines up with the edge of the cam follower. The eternal struggle for survival.

My initial plan (First picture above) was to use a cam follower to push the bird head up via a point along its neck. (Note that the worm is not attached to the cam follower in this picture) This would work and is fairly straightforward to implement but would have a dirty great bid push rod in the middle of the model. So to my second option (second picture); extend the lower neck linkage and attach the push rod further back, that way it will be hidden between the legs. This would work but adds an extra layer of complication. There now needs to be a way to pull the head back down so new linkages and levers are needed. I'd also have to move the cam follower under the snail cam so that it was pulling in the correct direction. 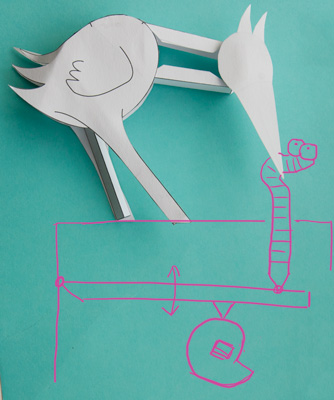 But things don't always have to be as they appear. This project is intended to be a model of a bird pulling a worm out of the ground but what if it was the other way round? The worm pushes the birds head upwards rather tahn being pulled up by the head. The visual effect would be the same and the mechanism can be made much more simple. I'll need to work out a way of flexibly joining the worm to the beak but that is the only tricky bit that I can foresee. (famous last words!)

And so, onwards to the prototype.