Designing in 3D can be a tricky process. I tend to do most of mine, especially character design, by cutting up bits of paper and sticking them together at different angles. Once I'm happy with my design I cut the bits up and stick them in the scanner before transferring them to the computer. Time to step into the 21st century perhaps. With that in mind I've been trying out various pieces of 3D software.

3D software comes in a whole range of different packages some of them costing many hundreds of pounds. I really want to be able to share what I've learned as I go along so in the end I've decided that I will go for one of the free packages. (That's all I can afford anyway 🙂 The two main ones, as far as I can see, are Google Sketchup and Blender. 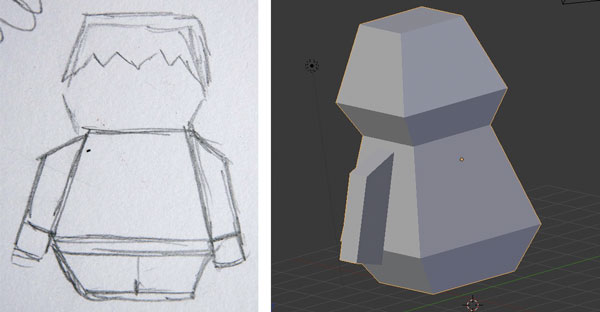 After trying both I'm currently leaning towards Blender. It has a feature called UV unwrapping which lets you unfold your model into a net ready to cut out. The picture above shows the 3D model I've created from the sketch on the left. I still need to work out how to make the hair but it is coming on.

If you have any other ideas of free/cheap software I should try, let me know.