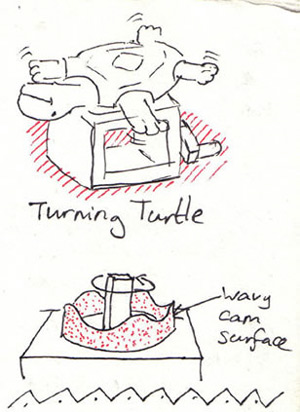 The turning turtle project is an idea that I've been thinking about for a while. This picture, from the workshop notes blog shows my original plan. I made up a rough prototype at the time but it didn't work as well as I had hoped. The mechanism itself worked but with the speed of turn of the turtle, it was hard to see the leg movement. At the time I thought about gearing the rotation down so that the legs moved up and down at the same speed but the tortoise turned at one quarter revolution per handle turn. It was all getting a bit complicated.
When I made the ninety degree joint I was looking for a character to add to the top of the box and I remembered the Turning Turtle idea. To keep things simple I didn't try moving the legs.

Following up from the anonymous comment in the Turning Turtle project, there are a few ways that the project could be extended using the ninety degree joint as a starting point. Visit the previous blog post and check out the second comment.

Two possibilities that I'll look into (when I've finished the Acrobat project). First picture, like the original idea, the legs are connected to a cam surface via cam followers. Perhaps if I increase the range of leg movements it will work better. The second possibility, fix the body so that it doesn't rotate. Inside the body, rotate a cam surface so that the legs, head and tail waggle up and down frantically.

Thank you anonymous commenter. These look like interesting ideas!