Push rods are used to take a movement from one point to another in a mechanism. They generally need to be rigid and relatively strong.

Presented here are three different designs of pushrods that I use in model. 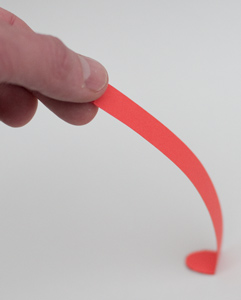 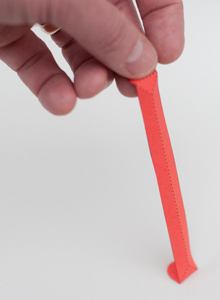 The simplest is the strip of card. This is flexible; actively bendy in fact. It is useful for pushing over very short distances and for only a small amount of force It works well for pulling, in fact if the force being transferred is a pull force this is all you need.

By adding a crease down the middle of the push rod the rigidity of the push rod is increased dramatically. A simple push rod like this is useful even over fairly long distances. It is rigid but doesn't work well if twisted.

The final iteration is to take the strip of card and fold it round into a triangular tube. This is harder to make and bulkier than the other designs but stronger both in the sense that it is the most rigid and that it resists twisting.