Further developments in the pendulum power model. I've gone back to basics to check that the mechanism does what I think it will. I want to use pendulum power to drive a model so that it'll keep moving after you have stepped away from it. 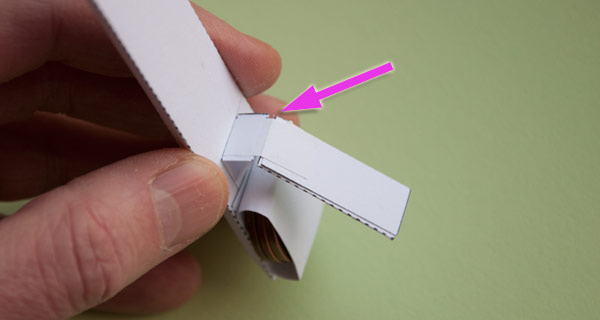 The model is basically a four bar linkage. I've used paper strips to make the joints so as to minimise bending friction. Notice that I've left a small gap between the two moving parts. (Arrowed above) When I tried it with the two parts touching I found that the model didn't move as freely as I'd hoped. I think it was probably the glue getting into the fibres of the paper hinge at the point where it should have been bending.

The other thing I could try would be to cut a slot into one piece and thread a tongue of card through the hole so the parts aren't physically joined at all. I might give that a go tomorrow.

Here is the whole linkage system joined together with the fixed points circled. Notice the stack of coins. (Two pence pieces. 25mm diameter) The more coins the more mass in the pendulum. The more mass the better it will overcome any friction. 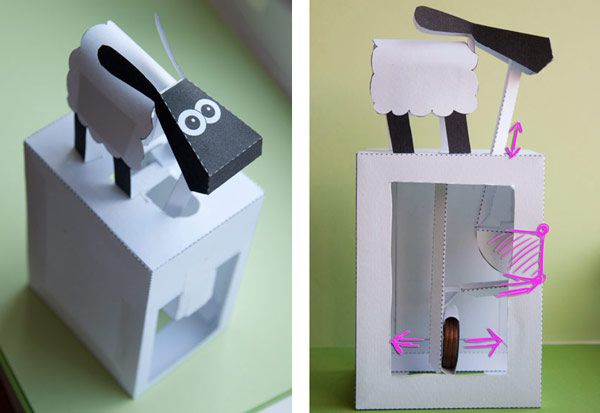 I threaded and glued everything together and tested it out by attaching it to the character from the agreeable sheep model. I've made a very quick video and uploaded it onto the YouTubes so you can see how it works.

The end result is a mechanism which could be at the core of some interesting models. Changing the length of the pendulum will change the speed of movement so for example a dog's wagging tail could be powered by a short pendulum and a jumping moon walker by a long one.

My plan now is to make this into a starting point download for you to create you own automata then make a finished character based download.