Invented in 1864 the Peaucellier linkage (poo-selli-yeah) linkage was created as a way of making straight line from circular motion. It was used in steam engines to control valves without the need to guides. The peaucellier linkages, invented by, you guessed it, monsieur Peaucellier, is mathematics in motion. The four red parts are all the same length, the circle radius is the same as the green link and the two yellow linkages are the same length.

As long as these ratios are adhered too, the grey dotted motion line will be straight. 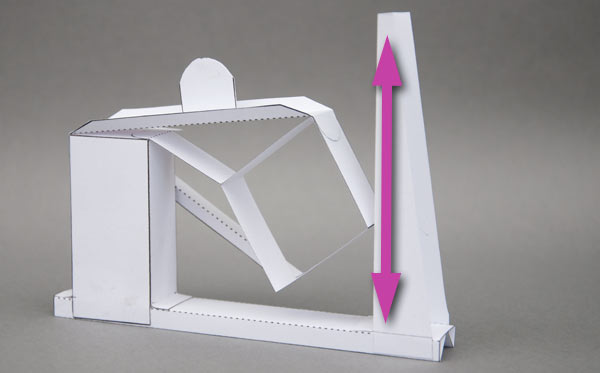 I've been helping #1 Son with his mathematics revision so I've been in a geometrical frame of mind. Inspired by the maths, here's my paper version of the Peaucellier linkage. The end of the linkage moves up and down maintaining the same distance from the vertical bar with the arrow on. Animation below.

I'll be doing this as a download then I'll have to find a use for it in a model. Something that moves up and down in a straight line. A meerkat? Groundhog?