I've been thinking of a few different ways of laying out the parts on the double ratchet. I'm wanting to change the housing that holds the ratchet pawl from the double sided as in fig 1 below, to single sided assembly so that ratchet pawl is visible in all its glory.

I had originally used double thickness card on the side of the housing to add rigidity. With a single sided housing I needed it to be even more rigid so I decided to make it as a thin box, 2. Finally, I decided to simplify the top of the ratchet housing by making it flat. 3. 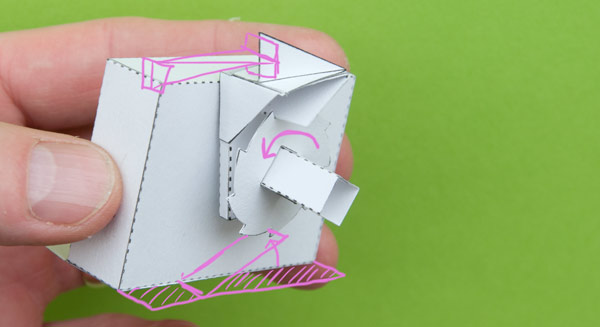 Here it is fitted together. I've changed to nine teeth on the ratchet. Because the handle that drives the ratchet will now work in both directions that means that four and half goes back and forth on the handle will equal one full turn of the drive wheel. I'm going to reshape the box to make it slightly lower and a little longer. I'll add a rocker on the end where my thumb is and link the whole lot together. Its getting close to being a working prototype now. It promises to be an interesting little mechanism!