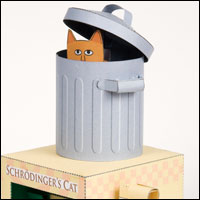 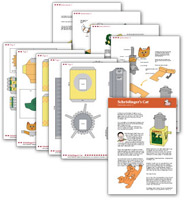 A crafty creation for you to download, print out and make. Print out all the parts on your own printer then make this fascinating mechanism.

Turn the handle and the cat peeps out of the rubbish bin to see if the coast is clear. The cunning mechanism uses gears and cams to drive the movement.

In 1935 Erwin Schrödinger devised his famous thought experiment, the eponymous Schrödinger’s Cat. As this experiment ended with a cat simultaneously alive and dead and then either dead or alive his cat was obviously not keen to participate. He spent the latter part of his days hiding in various darkened corners before The Experiment could be carried out. This model shows one of his favored hiding places.
The thought experiment is described in more detail in the kit, but don’t expect to understand it. Quantum physics is really weird!