A naughty/nice detector. Press the button on the Santa model and he randomly raises either the Naughty or Nice flag. Easy! I've tried this before though. It turns out that randomness is not as easy as it looks. 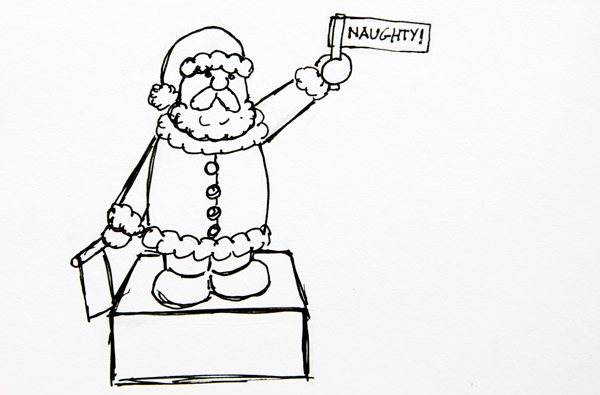 A friend of mine tells a story of how he went on a team building visit to Whitby. They were split into groups and given a variety of problem solving tasks to complete. One task was to find the height of the television transmitter mask that loomed over the nearby cliff tops. Many of the groups rushed off to the local shops to buy protractors and measuring devices using clever mathematics and observation to calculate the height of the tower. In those days before the internet my friend's group rang the BBC and asked. They came away with the easiest to find  and most accurate answer.

That story has always stuck with me. It came to mind when I was making the ratchet model. I'd used a complex system to apply friction to the main wheel. Regis pointed out a much simpler, more elegant solution.

So it is with that in mind that I head with trepidation towards the creation of random movement. Am I missing something obvious? Is there an easy way of achieving the same ends? We'll see.

My starting point is a spinning rotor. Spin the rotor and let friction stop it in a random position. Just like a little tiny wheel of fortune. Where she stops, nobody knows!

Hopefully I'll be able to kick the wheel into action using a toothed bar pulling up past the square rotor shaft. 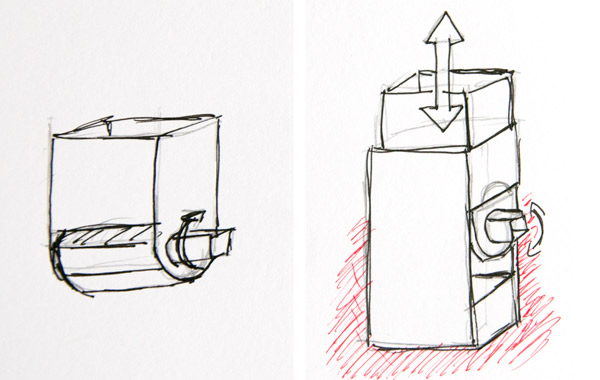 I'm planning to fit the rotor into a holder (above, left) where it will be free to spin.

This module will then be fitted inside a holder and be free to move up and down. As it moves up it will be moved passed a toothed bar (not shown here) to make it spin. This should be where the randomness comes in. When the rotor is pushed back down it'll settle into a fixed position. I'll cut alternate holes in the rotor (outlined below) and depending on which hole is facing downwards either one arm or the other will raise. Naughty or nice? Only Santa knows for sure. 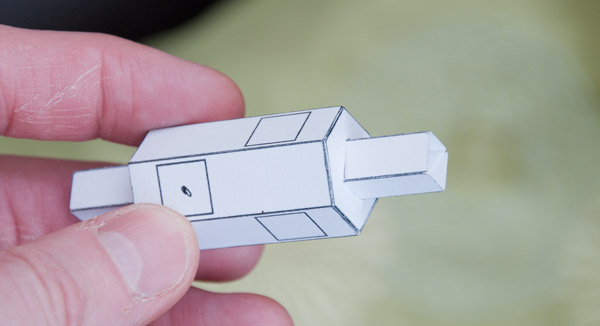 Here's a first draft rotor. Too wide, and the shaft too fat but you can see where the alternate holes will go. I'll have another go after I've had a coffee.